Okay, so this is going to be a bit of a bumpy one, so bear with me.   I will admit having my histio warrior/cancer kid as a first child and having ONLY her for 6 years has totally warped how I look at the holidays.  I sat back and thought it through and realized that I experience two completely different things during the holidays:

It’s dizzying, the juxtaposition between wanting a joyous holiday and just wanting it to stop.  You find yourself trying to force the joy for the holiday so that your children can remember back at these times with pleasure, but you find yourself failing.

Admittedly it’s amazing to watch the kids dig into their presents.  It’s GREAT to see them rolling around on a “new” bike or all three sitting in a circle playing with the “new” megablocks (apparently fun for ALL ages!!  GREAT toy!  Sophie builds entire complex cities with it, while Archer dismantles and rearranges, and Vivi just gnaws on the buildings.)

When Christmas morning shows up, their joy is practically palpable.  The 10 minutes it took them to get through the presents was nearly the entire time that I was able to feel that pure untainted holiday joy.   Their smiles and laughter did it.  Then it’s back to normal.  Kids playing and fighting, us just struggling through the day.  Ugh… so much for holiday fun.

I have vivid childhood memories of hanging lights for hours in the cold and drinking hot cider or hot chocolate with tiny floating marshmallows and watching Christmas movies with the fire going, and the cool crisp air and Christmas songs, and it FELT LIKE CHRISTMAS for a full MONTH each year.

I haven’t been able to give that to my kids.  My daughter hates most Christmas movies.  We live in Florida and have like 5 bushes and a tiny tree in the front yard.  It’s not cold; there’s no fire in the fire place.  Not to mention a toddler and an infant in the house that are unruly or just miserable  outside and every bug stings my kids.  Only my kids.  I swear, they attract them.  So hanging lights in the cold, followed with a warm cider and carols?  Nope.

It takes me 5 minutes to hang our lights in our sad little yard, Dan is inside with the babies, and it’s too stinkin’ hot for hot anything to drink.  Soooo, I try to jazz it up with eggnog and peppermint ice cream, but meh… she’d rather have a frosty and play on her kindle.  And the other two are still too little for the ice cream and eggnog fun.

Then you have to take into account having a chronically ill child.  These are the factors that can leave you just feeling blah when you want that joy you used to get:

1.Working around the illness:  Seeing Santa is an issue.  When you have an immunosuppressed kid,  you can’t go out in public much.  So that means no mall Santas.  And good luck finding any other Santas around with easy access.  So Sophie went the first 5 years of her life not seeing a Santa.  We went to the mall when she was 6, and she wanted nothing to do with him.  She was scared and just RAN from him.  Since then, she’s told us she doesn’t want to see Santa. At all.  So Boom… that’s gone.

And if your kid has a tactile issue, or OCD, or sensory problems?  Ugh…  Shopping and going out is a triumph of the will.  Shopping with a chronically ill child?  Nope…  just a big nope.  It’s cold and flu season.  What are you doing with that immunosuppressed child out in the population?

When they are finally able to go out because their immune system has somewhat recovered, and you try to plan something fun, invariably, the excitement will cause your fragile child to get sick as you are pulling into the lights park or the place where the caroling is going to happen.  So you head back home so the kiddo can sit in her bed with a puke bucket and a kindle.  Happened this year.  She got too excited and ended up sick.  Not a joke.  And that’s not abnormal for a kid with as many complications as Sophie has had.

Then there’s toy shopping.  Depending on the issues your child has, you have to choose the toys carefully.  You can get a swing set, but not one with monkey bars, cause she can’t afford a fall.  She’s too fragile.  You can get legos, but not a soccer ball because she can’t play contact sports.  And the bike was a negotiation with the liver doctors.  A LONG negotiation.  I nearly lost it.  But she has a bike and can go no where on it without her daddy or I within grabbing distance, a helmet, knee and elbow pads, and we can’t let her fall.  Period.  It’s just depressing shopping for your sick baby sometimes.

2. Budgeting:  This is a real  important thing. You’ve got to PLAN AHEAD!! Medical bills and other bills are sucking you dry right now, and you have to find the $$ to celebrate something other than your child?  Well crap on a stick. 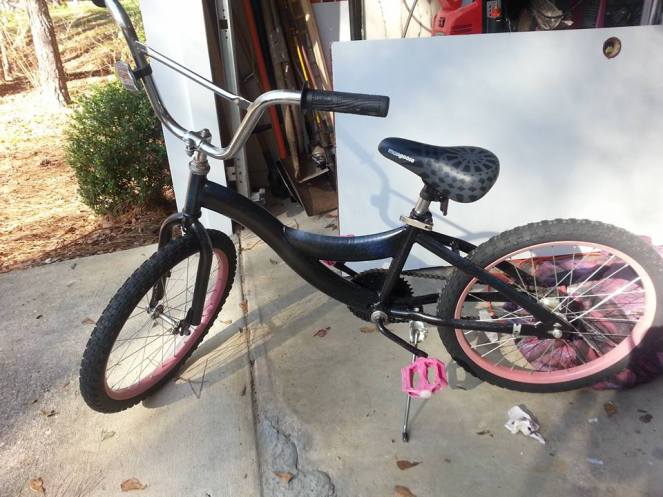 But you’ve put in about $30 total into it and about 30 hours total, done nearly nightly at midnight when you should be asleep cause some kid is going to need something in a couple of hours.  And you eventually run out of time to clean up and paint the tricycle you bought at Goodwill for $1 for the second kid and my parents have to come in a buy a new tricycle because I fail so hard.

Their dream toy isn’t likely to happen.  You want that $70 dragon that shoots lights and roars, son?  Nope… how about some used megablocks from the consignment shop? The dream toy is not happening unless that is the only thing under the tree… and momma and daddy sell something.  Like the bed.

We’ve taken to planning for 4 gifts per kid.  Something they want.  Something they need.  Something to wear. Something to read.   (A Lego Toy, the used/refurbished bike,a snuggie, a $1 book from the Goodwill bookstore) That worked out this year and was pretty good for budgeting, especially with consignment shops and goodwill.  I think the only new thing we bought this year was the Legos for Sophie.

Usually, the budgeting is so severe that it leaves the parents without ANYTHING to give each other.   I was able to get an elliptical this year, but that’s cause I sold some jewelry to do it, and admittedly, I should have used that $$ towards medical debt rather than the elliptical but I would like to think my own health matters at some point and I don’t have the time with a full time job and three kids to join a gym.  I was able to sell another piece of jewelry to pay for a little gift, etsy prints in Walmart frames, for Dan’s office this year.  Star Wars stuff that I knew he’d like.  So we were very lucky this year.  And the budgeting worked out.

2.  Exhaustion:  OMG, you have SO MUCH TO DO ALREADY!  You’re holding down a job, trying to keep your kid(s) alive and healthy, making sure all the medications are covered, the doctor visits are taken care of, any cough, any sneeze, anything that turns up because it is slightly colder and it’s flu season and the air is just so much wetter and yuck yuck yuck… Then BAM… the holidays have shown up and you now have to somehow sneak around and pose a stupid Elf doll every night, make sure the tree is decorated with the “help” of the children, put up the lights outside with the “help” of the children, watch the movies, play the songs, sing along, buy the food, have the family visit or visit the family yourself, travel, cook, clean, and why are HALF THE LIGHTS ON THE TREE OUT?  I give up… just toss the icicle lights into the bush and walk away, damn it…. I’m done.  Just shoot me.

I’m tired just writing it.  Christmas is not as easy as our parents made it seem.   Gotta say, the ‘rents were DAMN good at hiding the hell that is the holiday season.

3.  Apathy: You’ve seen your child on the edge of death.  Your friends have lost their child.  You know a family that has lost their little boy to cancer a couple of days before Christmas morning.  And there’s nothing that you can do to fix any of it.  You try to not curl up and cry in front of the kids.  You put on a smile in front of them and you TRY to make the holidays magic for your kids.  But that magic is gone for you.  You’ve sat on the threshold of hell.  You’ve smelled the sulfur.  You’ve felt the heat.  And I’m sorry, but putting up a stupid tree and ripping into presents just doesn’t take that pain and horror from your brain anymore.  You can’t wipe that slate clean.   (and so many other cliches.  I’ve got more…)

So yeah, you are moving through the day.  You WANT to be magic for the kids, but damn it if you just can’t muster up the ability to care at some points during the holiday season.  And when people come up to you all cheerful and all “It’s Christmas!  You HAVE to feel the reason for the season!”, you have to find the strength somewhere deep inside to not slap the ever loving TAR out of that person.

And the Elf on a Shelf.   ~sigh~  We moved that elf about 10 times this month.  Ten.   It was supposed to be every day, but… We were tired and we forgot after all the meds and feeding of dinners and doing homework and playing on the floor and tucking in and feeding of the baby and rocking of the toddler and talking Sophie through nightmares… we just couldn’t find it in us to get up at 1 am when we woke up for a screaming baby to go find that thing and pose it. I do have to say, though, that little girl elf really struck up a relationship with Woody: 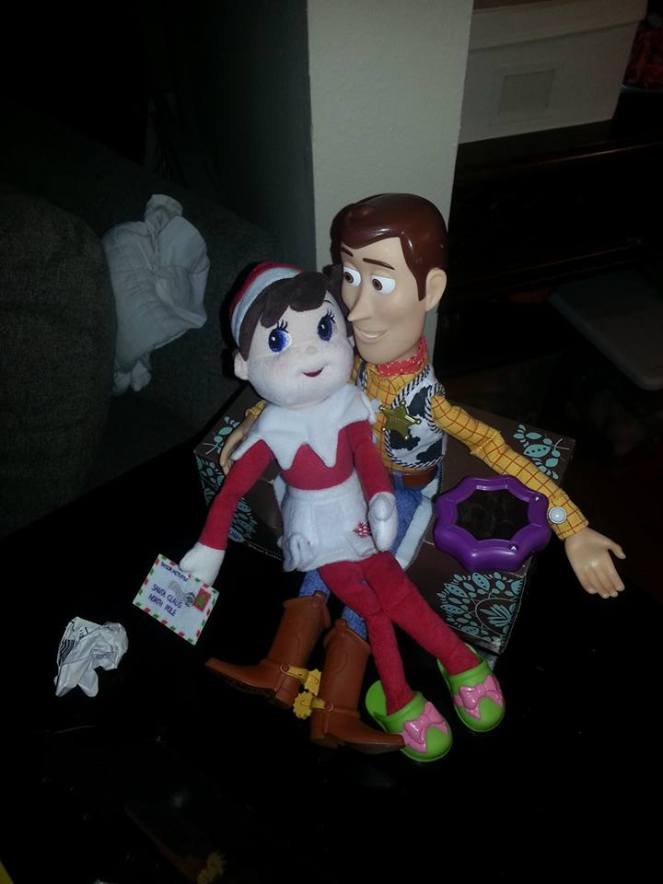 We DID go all out for the gifts within our budget, but that’s just going to happen.  Chemo moms and dads and the parents of chronically ill children WILL walk through FIRE to get things our children need and get things that will put a smile on their lovely little faces.  But the taking the step towards actually outwardly experiencing joy on a regular basis is just so costly when you have nothing left.

You forgot to pull their stockings down where they can rip into them on Christmas morning so they can get the little $1 matching card game and chapstick you shoved in there?  You remember it sometime around dinner?  Do you a) immediately stop and run and get it, or do you b) tell your child to eat her meal and then afterwards she gets it, at which point you both immediately forget it until the following morning?

I’ll take B, for the utter and total Parenting Fail, Alex.
That’s right, people.  I did that this year.

So yeah… the holidays…  Yay (waving the sarcasm flag).  If you’ve just hit that wall, and you are just looking at the holidays and thinking “Ugh… the holiblahs,”  You.Are.Not.Alone.

After all, as National Lampoon so clearly put it, I don’t know what to say except it’s Christmas and we’re all in misery.